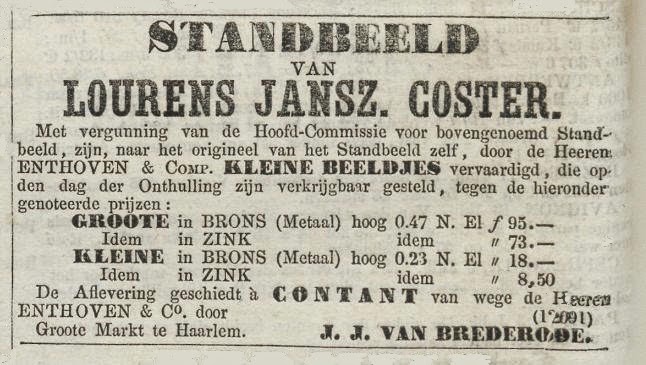 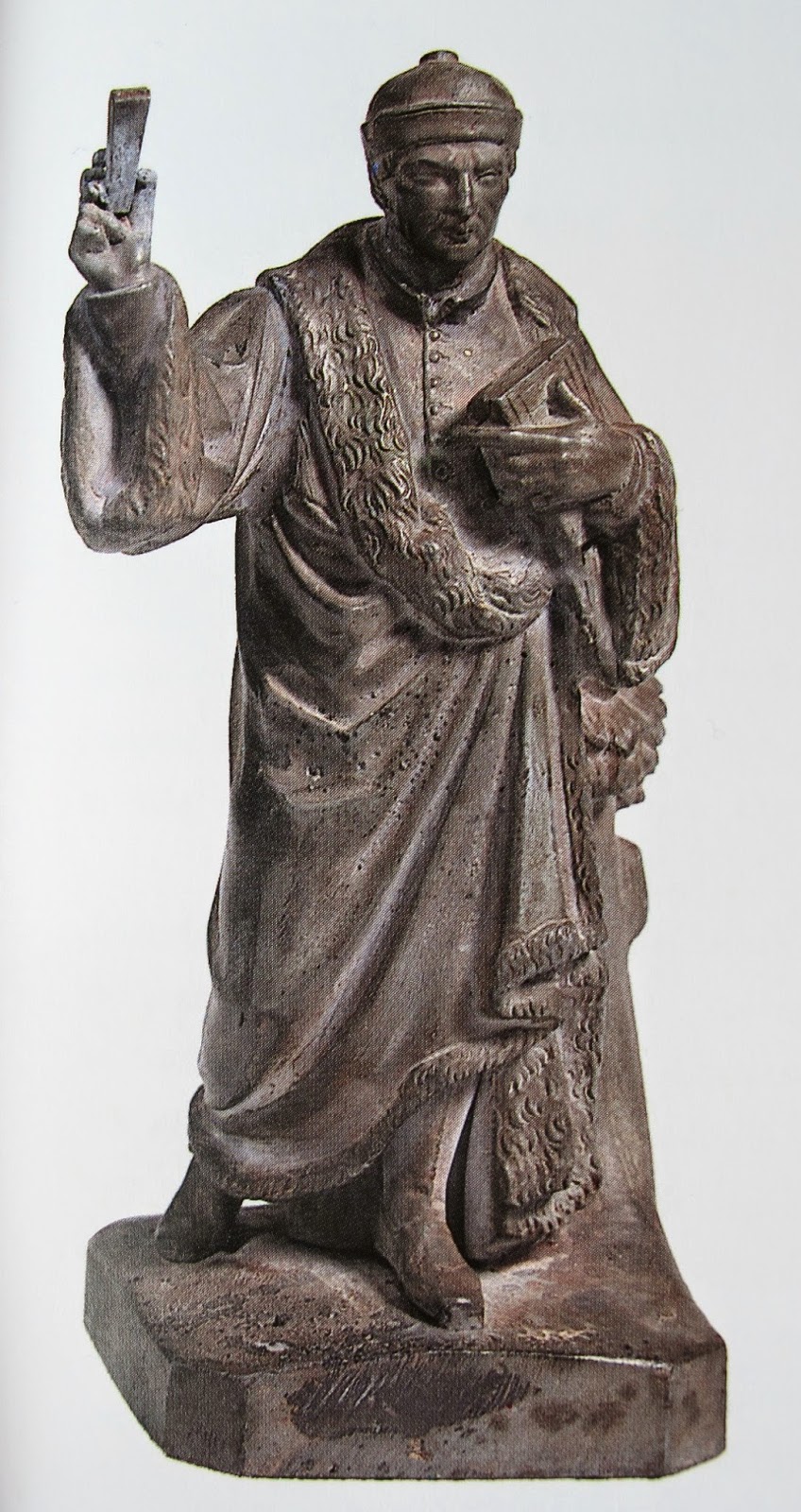 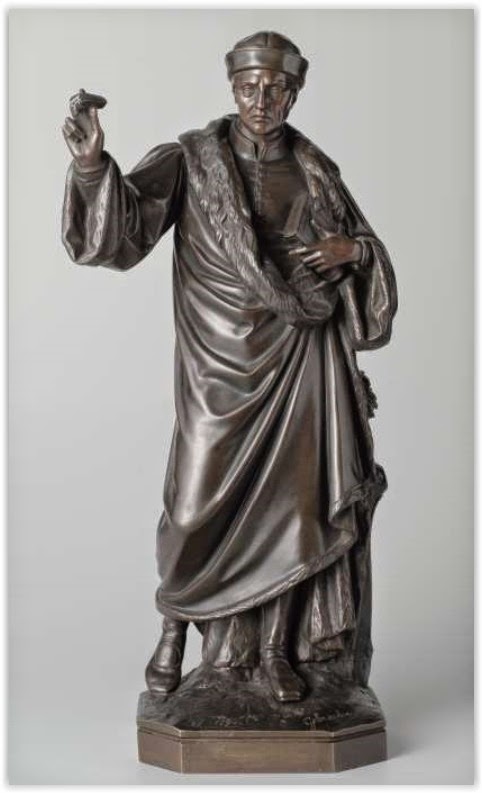 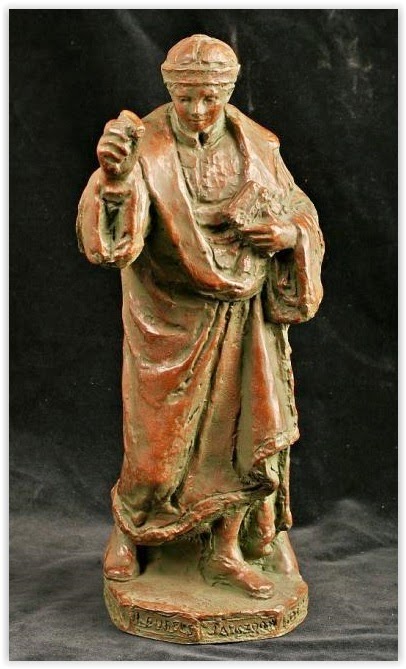 Being an 'Ai Sho Ka' 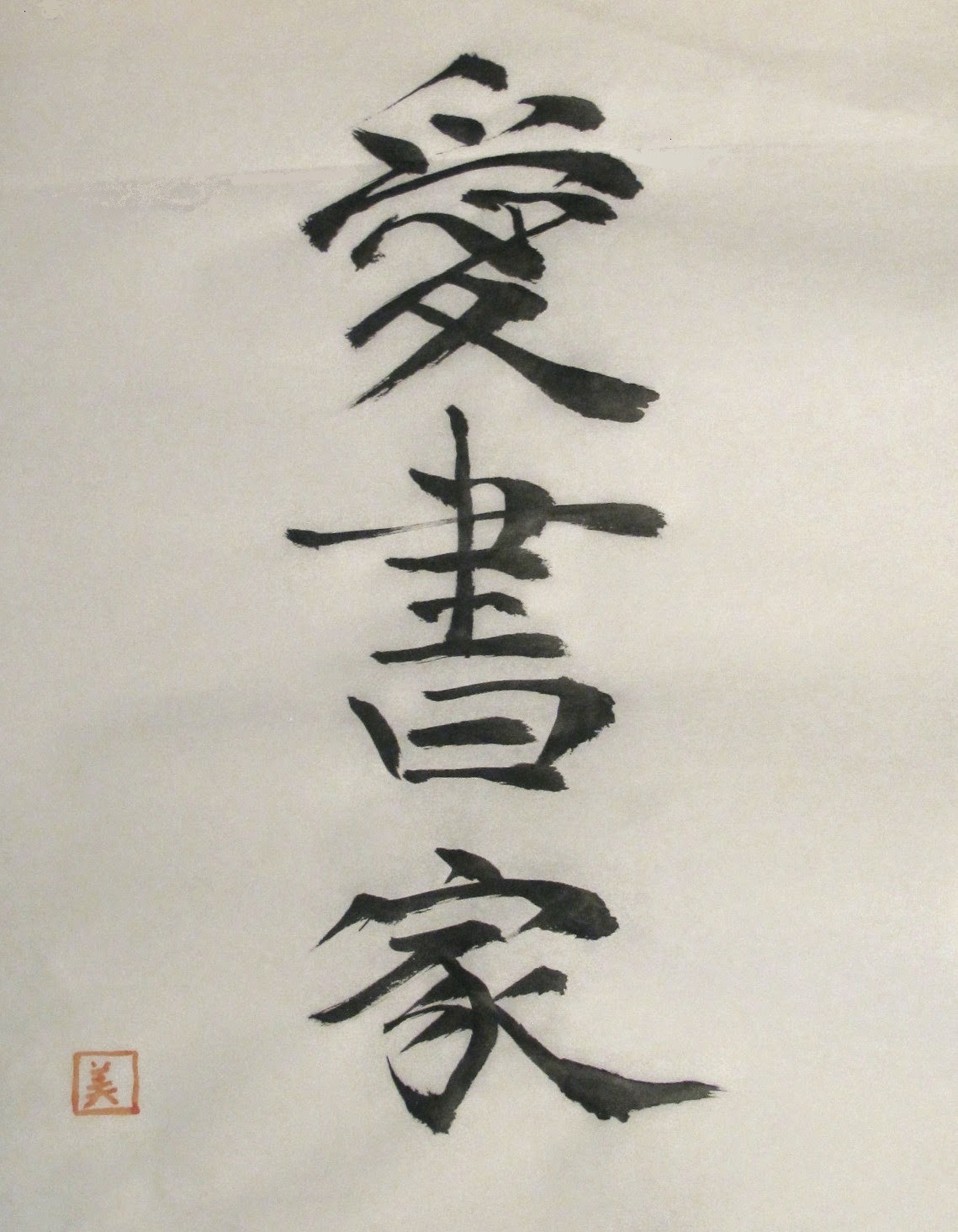 Do you buy books you cannot read?
I normally don’t. But this time I couldn’t help myself and paid almost two hundred fifty US dollars (€ 175,- euro) for three books in Kanji (logographic Chinese characters used in Japanese language) printed on very thin paper and traditionally bound in yellow embossed paper wrappers. Why?

Well first of all because I am a Bibliophile (which according to my partner is synonym with ‘totally nuts’). I like books in all their different forms and aspects and I was struck by the fragile but beautiful appearance of the three volumes. Secondly because I was intrigued by the incomprehensible text and the numerous interesting illustration.

The bookseller couldn’t tell me very much about them. Most of the stuff he sold on the little ‘Spui’ book market in Amsterdam was about European Art nouveau and Art deco.
I leafed through the books and found in one of the volumes a little paper telling me that this was an edition of the ‘Hakubutsu Shinpen’ printed in 1874. I decided to take a chance, and bought them. 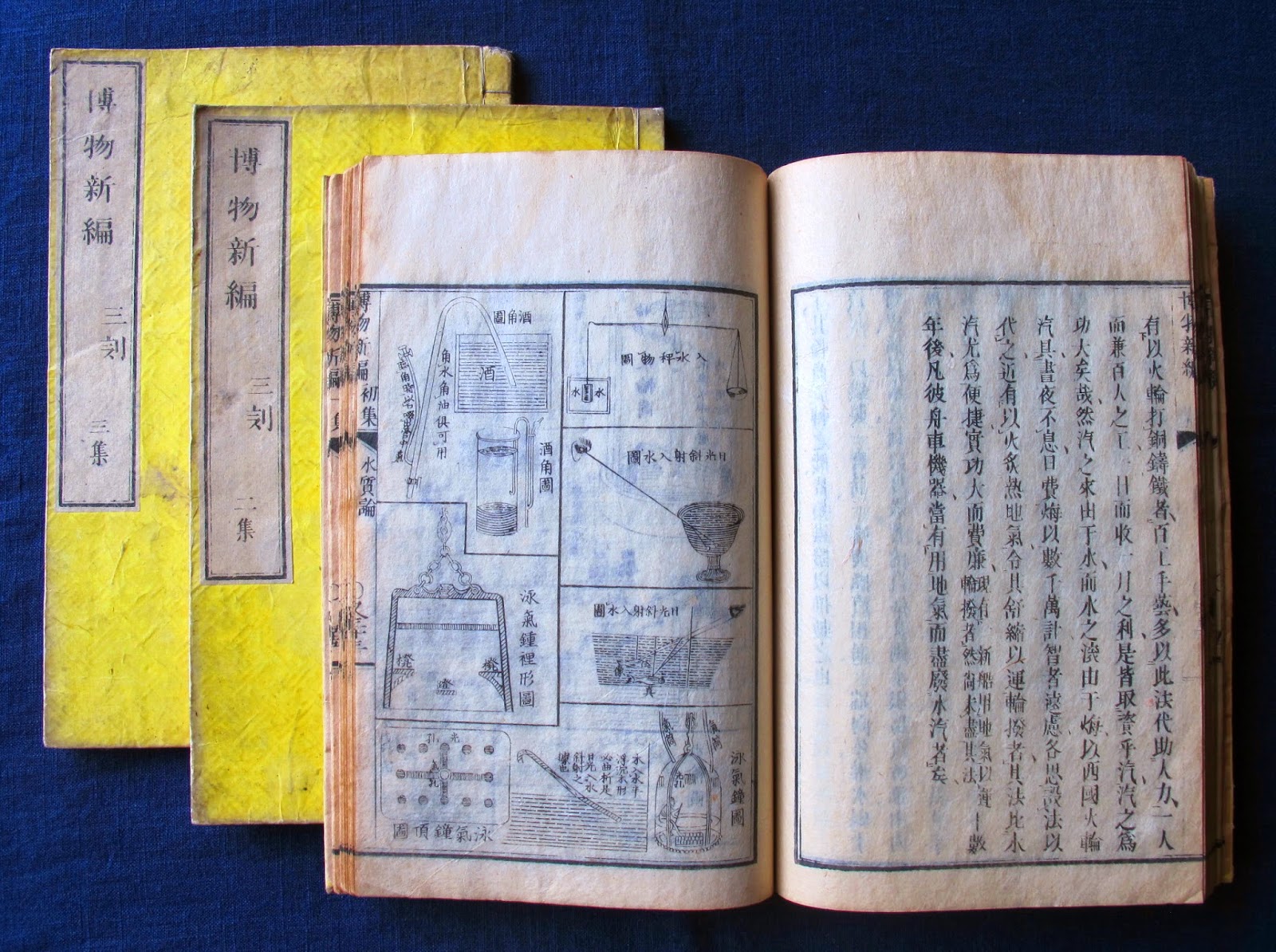 For me every old book is an adventure that has to be explored. As usual my exploring started at home behind the computer. I soon found out that this was indeed a copy of the ‘Hakubutsu Shinpen’ (‘Book of Natural History’) written by Benjamin Hobson (1816-1873) and originally published in Shanghai in 1855 as ‘Bowu xinbian’.

Benjamin Hobson was a British missionary doctor who spent two decades (1839-1859) in China. He founded hospitals in Hong Kong, Guangdong and Shanghai; trained local physicians in Western medical techniques; and wrote several medical and scientific textbooks in Chinese based on European sources, including this book of Natural History.

The Japanese versions of Hobson's works appeared early Meiji period (1868-1912), a critical time in Japanese history, when the country ended its isolationist foreign policy and began opening its ports to Western trade. The text conveying scientific knowledge that had developed in the West was warmly welcomed in Japan and very popular. It was repeatedly printed and published in numerous editions.


With the help of my Japanese Twitter friend and Shodo lover Masuto Nanami I learned that the text must be read from top to bottom down a column, and right to left across columns. He translated some words for me too and showed me how to write ‘Bibliophile’ or "Ai Sho Ka" in Kanji. The three characters: 愛書家 are (from left to right) for ‘love’ (Ai), ‘book’ (Sho) and ‘Ka’ (person). Look at his video, seems easy, huh?

‘Hakubutsu Shinpen’ is divided into three parts. The first book (67 folded leaves), on physics, has sections on topology, heat, water, light and electricity. The second (30 folded leaves) is dedicated to astronomy and the third (34 folded leaves), entitled "Outlines of Birds and Beasts" is devoted to natural history. All three parts are illustrated by an anonymous artist. 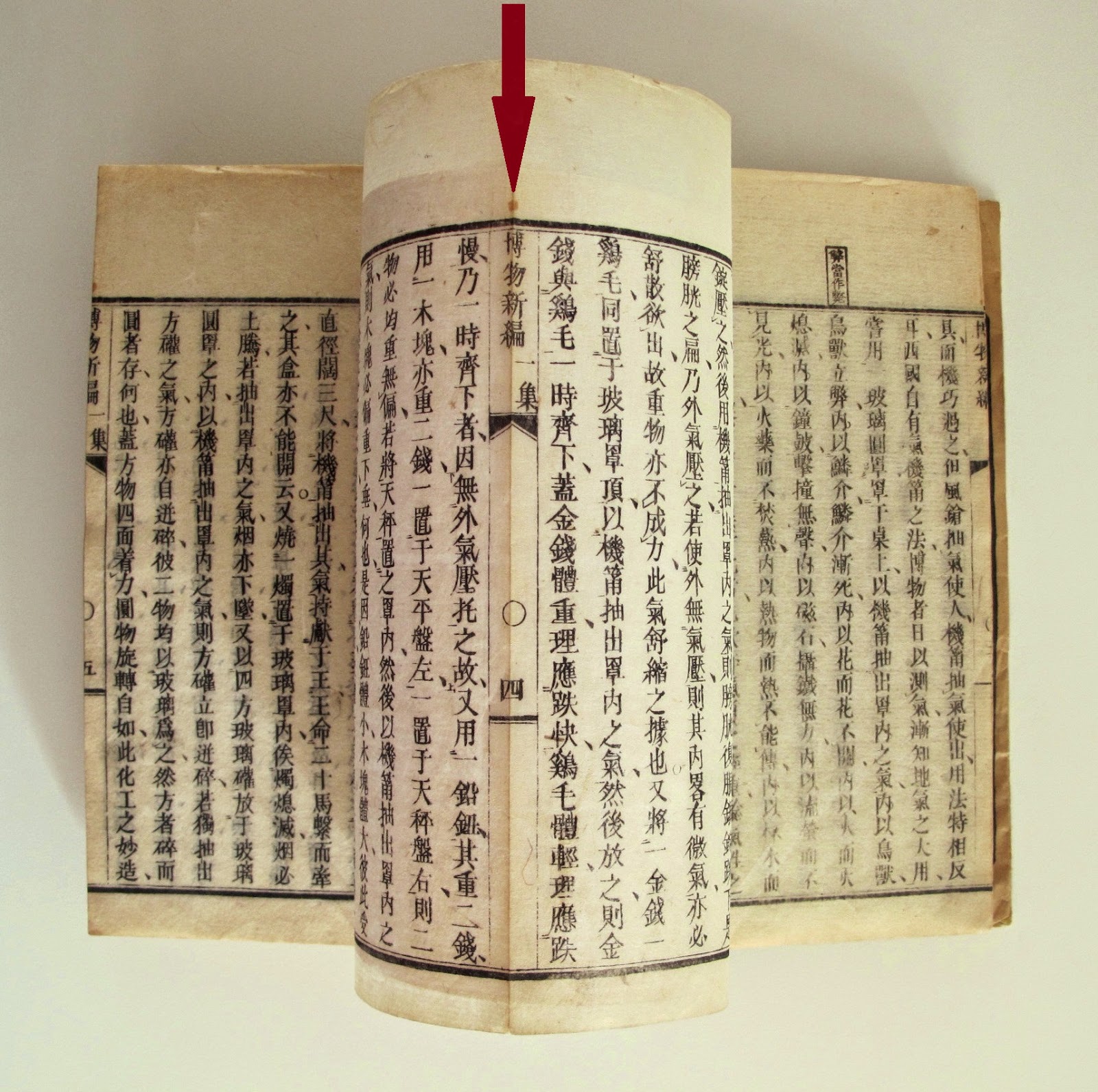 The books are an example of traditional Japanese woodblock printing. In case of two text pages every woodblock had a total of 21 vertical columns with characters carved out, including a central column with the book title, part- and page number (see picture above). After printing the sheets were dried and folded oriental style; ‘Fukuro toji’. The bookbinding is typical Japanese style; ‘Yotsume toji’. 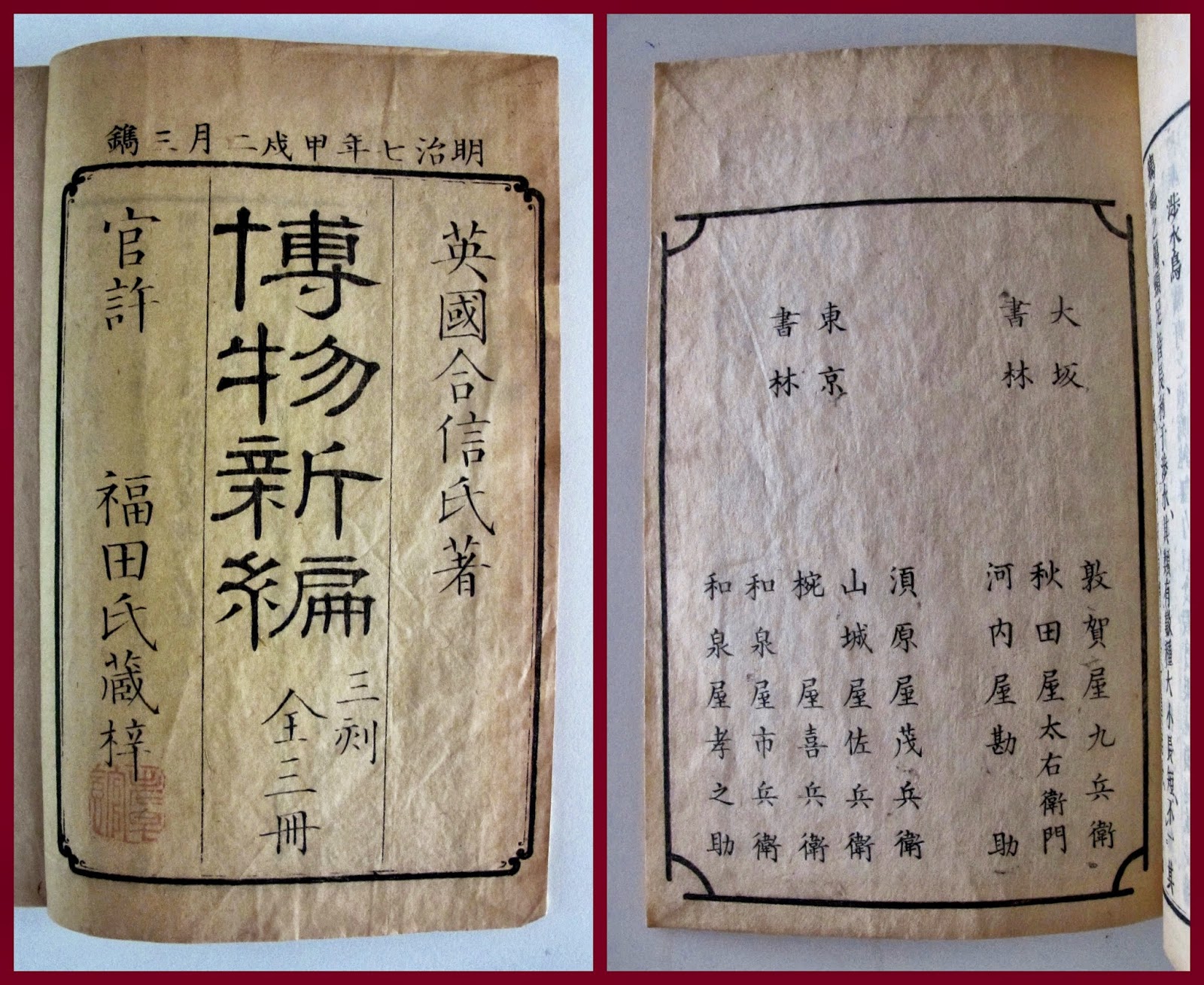 The title page of my ‘Hakubutsu Shinpen’ is divided into three vertical columns and has an elegant border. The text outside on top indicates that this is the 3th edition published Meiji 7 (1874). The big letters characters in the middle are the title. The publishers name is in the left column; ‘Yorozuya Heishirō’ (Tokyo) with at the bottom his red seal stamp (in Japan called ‘Yagō’). At the end of part three there is another page with a special border and text. This is a list of the bookstores and their owners in Osaka and Tokyo.
As you can see on the picture below corrections (within a little border) are separately carved  and printed just outside the wood block text above the appropriate column. Right next to it you see some personal remarks by a previous owner written in black ink. 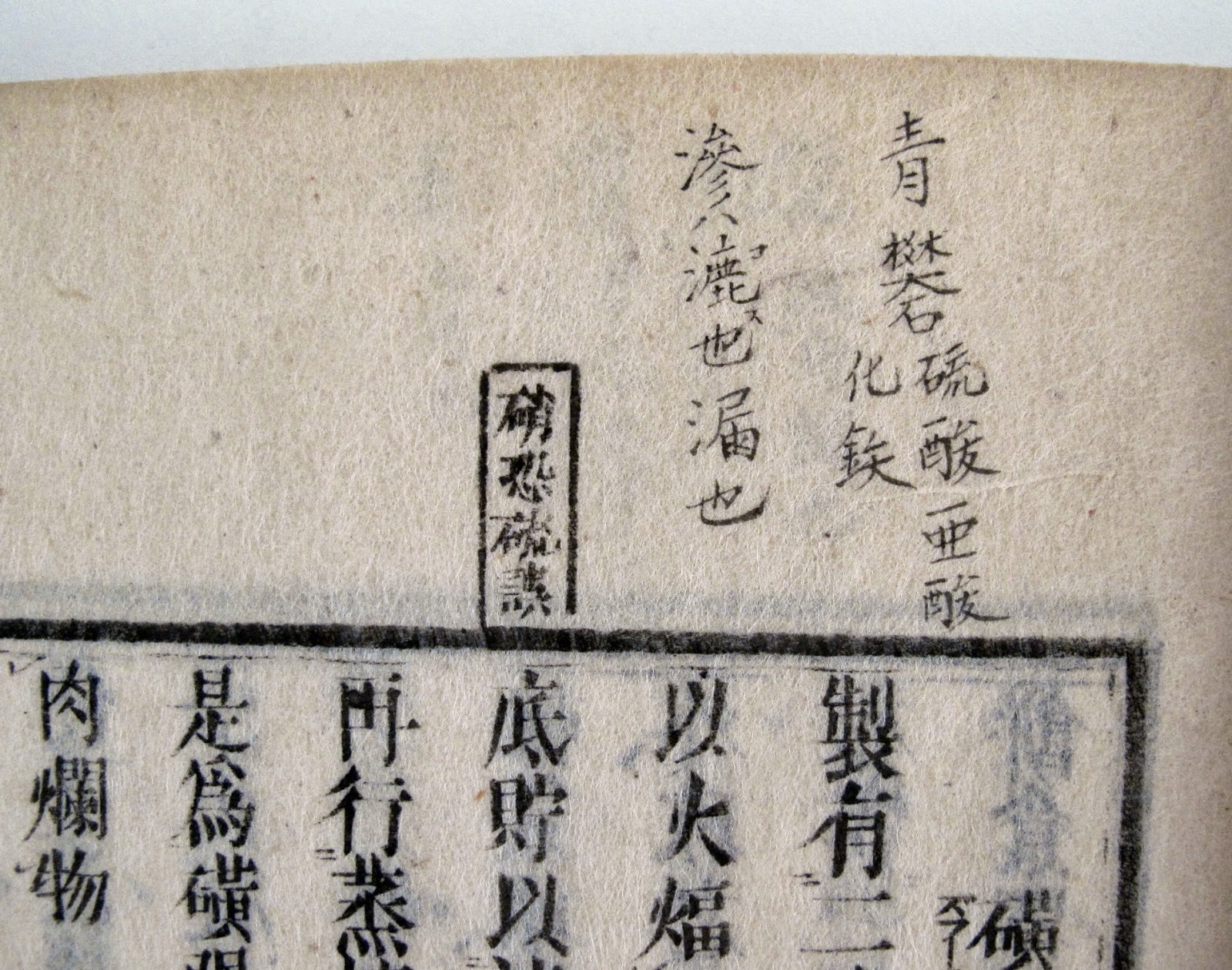 Most of the numerous woodblock illustrations look quit primitive but my favorite one, this railway locomotive, is very precise and detailed. Astonishing don’t you think so?
Remember that at that time (1874) for the readers in the ‘far east’ this illustration must have been their first acquaintance with a locomotive and railway. Railway history in China had to begin, and had only just begun in Japan (with a railway line in 1872 from Tokyo to Yokohama). 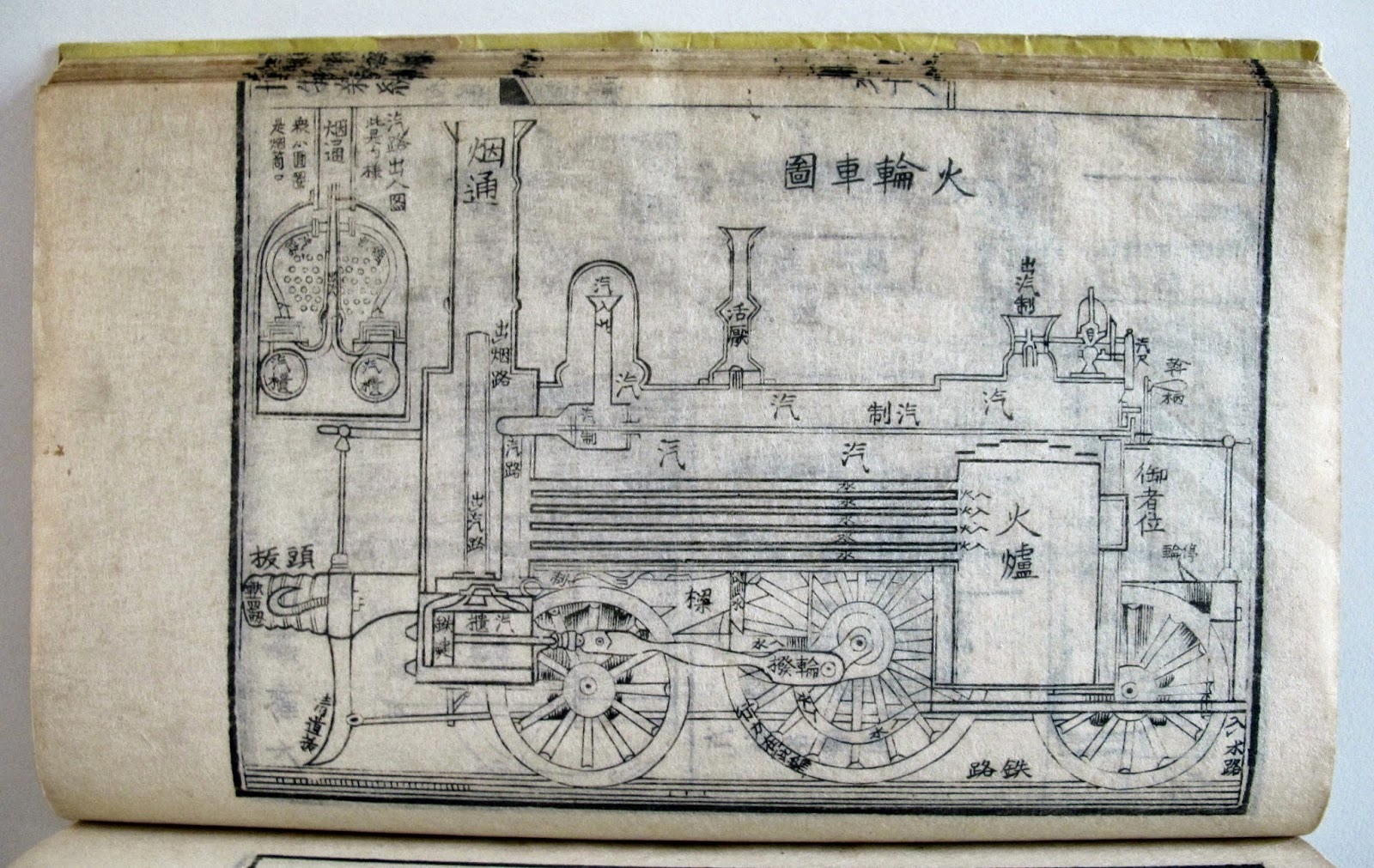 It is my first specimen of an old oriental book printed on rice paper (most likely ‘Washi’) in my collection. Leafing through the books I keep amazing myself about the soft paper with the mysterious printed characters and the beautiful woodblock illustrations. It is a feeling difficult to explain but I think it is similar to the amazement and admiration that the Japanese readers must have felt one and a half centuries ago.
For both of us it is a kind of ‘first contact’. For them with the wonders of foreign worlds and unknown knowledge, for me with the art of book printing and publishing in the Far East. 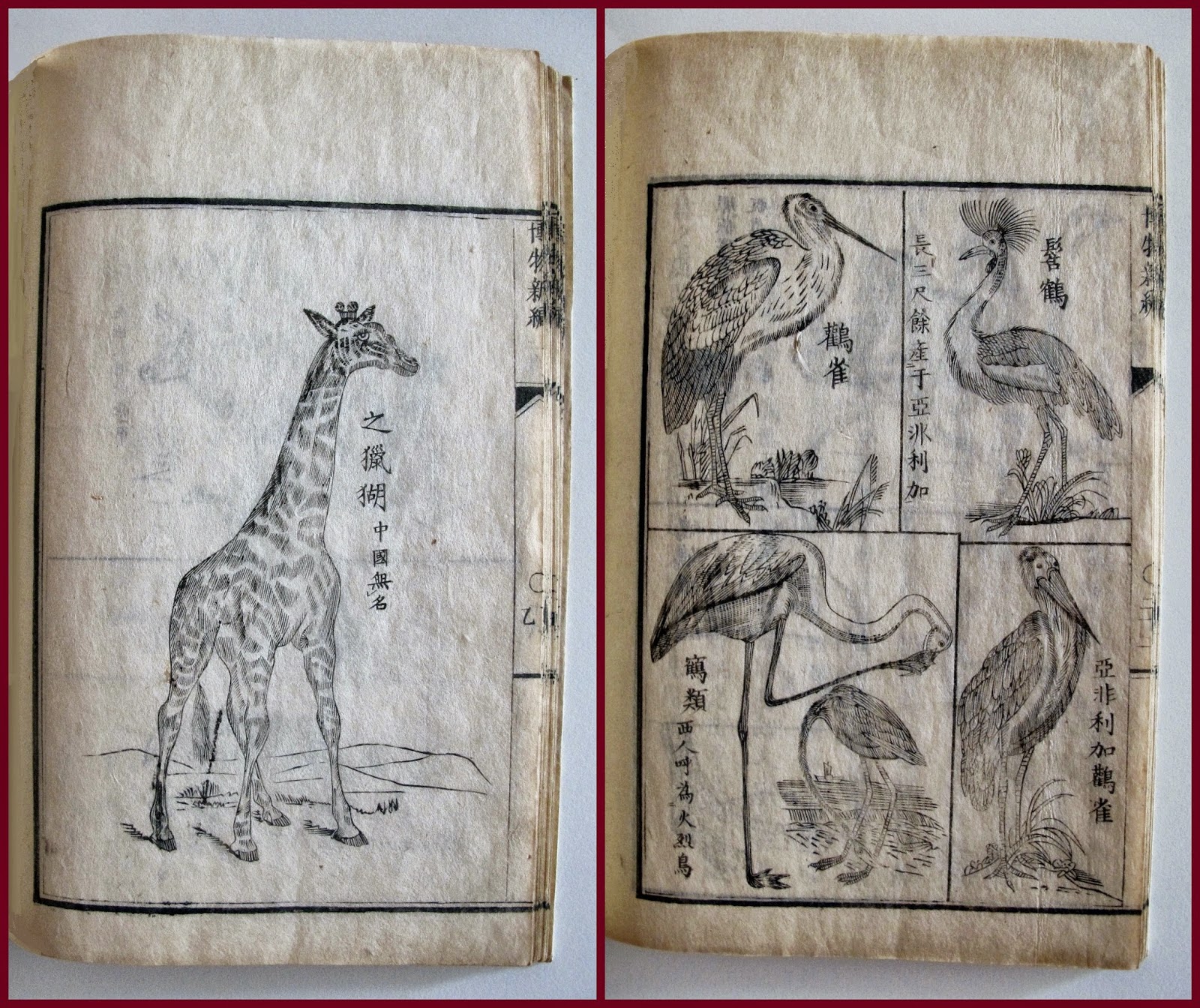 Is this 1874 edition of ‘Hakubutsu Shinpen’ rare or valuable? That depends! According to Worldcat there are five copies in public libraries in the United States (and this online edition in the Waseda University Library in Tokyo) but none in Europe.
As for the antiquarian book market I am sure you can find an edition using the internet.
I quickly found one on Ebay sold for less than I paid and another similar, 1872 edition, in the catalogue of an American antiquarian book dealer for a lot more.

But honestly, it doesn’t really matter to me.
This isn't about value or money. It is about the beauty of an object so different from what I am used to find on book markets. It is about the joy this book gives me as an “Ai Sho Ka” even without properly understanding it’s content. And finally, it is about learning from each other, then and now. 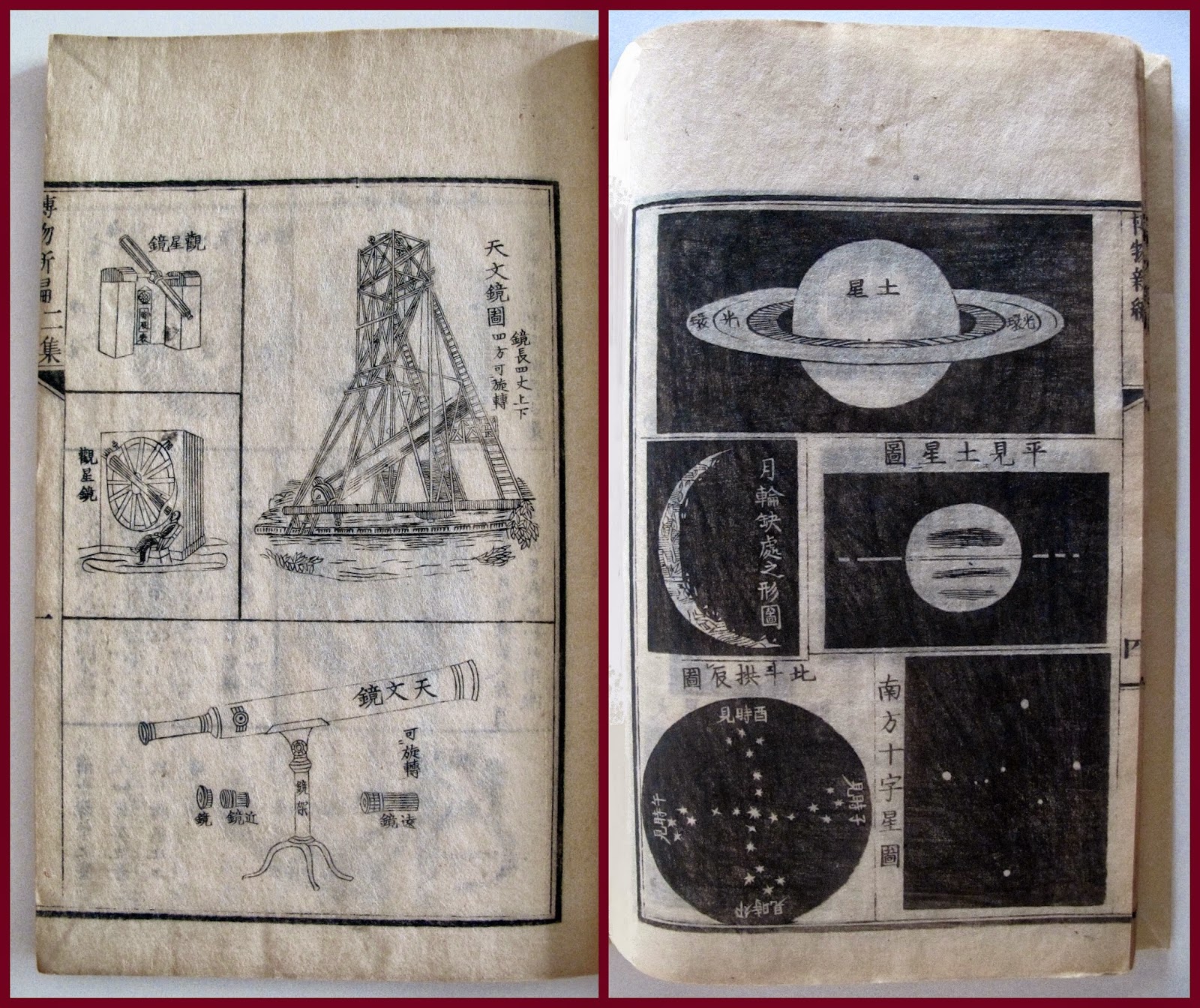