Ever been in Amsterdam?
As in every European city there is much to see. Beautiful old buildings, the historic canals (Amsterdam is one of the cities called ‘Venice of the North’!) lots of museums, history and art. For booklovers there are some great old book shops and flee-markets. People are friendly, and - guess what? - with few exceptions everybody speaks English too!

Especially in the summertime it can be very busy and crowded. For some attractions like the Van Gogh museum or Anne Frank House it really doesn’t make any difference. Summer- or wintertime, there’s always a long queue of waiting visitors.
If you are stuck in one of those and you are tired of waiting, tired of crowded places, tired of seeing too much in a time too short. If you need some time to rest, a place where your mind can get some peace, let me take you to a more silent and forgotten part of the town. 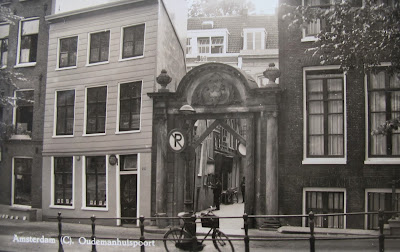 Let’s go to the Oudezijds Achterburgwal and take a look at this old gate, the ‘Oudemanhuispoort’ (‘Old-Man-House-Gate’ or in short ‘The Gate’). The complex behind dates from 1602 was rebuilt several times and originally housed poor old men and women but in 1880 the University of Amsterdam moved in. A century before the corridor along the south façade of the building was turned into a covered passageway (just behind this gate) with eighteen little shops for rent. They were called ‘winkelkasten’ (‘winkel’ = shop and ‘kasten’ = cabinet) because the niches were too little for a shop and too big for a cabinet.

Luxury items were sold here, like jewelry and precious metals. These articles gave the passage for a short time the allure of a grand shopping street. In 1879 the nearby ‘Botermarkt’ (Butter market), now Rembrandt Square (with his bronze statue) was shut down and the book merchants, called ‘book Jews’ because most of them being of Jewish religion, had to move to another place. Many restarted their book business in one of the ‘winkelkasten’ in The Gate.

Undoubtedly the most famous 'book Jew' was Barend Boekman (1869-1942). January 21st. 1939 he celebrated together with his colleagues his seventieth birthday in The Gate, along with his fiftieth anniversary as a book trader there. But happy times in Mokum, the Jewish nickname for Amsterdam, were not to last.
By the end of that year World War II started and in May 1940 Germany occupied the Netherlands. Jews were excluded from Dutch society and it became impossible for Jewish merchants to continue their business. Prosecutions started, daily roundups followed and bounty hunters roamed the city. More than 100.000 Dutch Jews were deported to the German concentration camps and never returned. Among them Barend Boekman and his wife. Both died in the gas chambers of Auschwitz on September 14th. 1942.

A Dutch Jewish bookseller who survived the Second World War was Menno Hertzberger (1897-1982) one of the founding fathers of the International League of Antiquarian Booksellers (ILAB) and the Dutch Association of Antiquarian Booksellers (NVvA).
Ten years after the War ended Hertzberger published a small book, by F.J. Dubiez; “Barend Boekman van de Oudemanhuispoort” (Amsterdam, 1955), to commemorate this colorful person. It is a limited edition of only 100 copies and some years ago I was lucky to find number 73.
It’s by far not the most expensive book in my library, it has no luxury binding and no color illustrations. It’s not fancy at all but still it’s one of my favorites, a wonderful and vivid memory of the 'book Jew' Barend Boekman and his time. 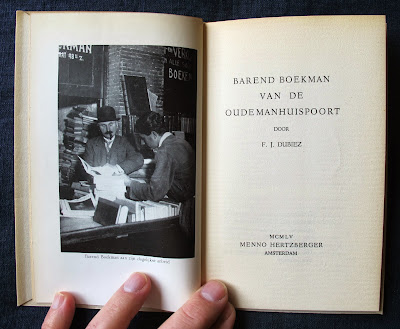 As Dubiez aptly wrote: “With the passing of Boekman and his colleagues from The Gate , something was lost. A specific atmosphere. An atmosphere indispensible for the true book-lover and -collector. It’s something he can’t live without and doesn’t want to miss because he needs it”.

In my teenage years, the seventies, there were still booksellers in The Gate. Sometimes no less than six or seven of those little shop cabinets were open, and then there was of course the famous shop of Pfann; “In 't Oude Boeckhuys” ('In the Old Bookstore’). 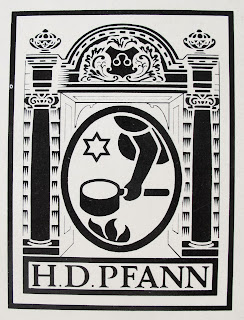 Pfanns’ little shop started in 1924, just outside the passage, in the open part of The Gate near the Oudezijds Achterburgwal (take a look at the illustrations). Founding father of this family of book- and print sellers was Hendrik Daniel Pfann I (1889-1957).

Everybody knew Pfann.
Like Boekman he was a very colorful person, with wild black hair and big mustache, always wearing his long velvet coat, jaunty flambard or black bowler hat. He was a teetotaler, didn’t smoke and wasn’t Jewish either (a novelty in The Gate!) but instead an active member of the Salvation Army. In 1949 Pfann celebrated his silver jubilee in The Gate.
According to Dubiez he was “not only a bookseller but also a passionate collector and an equally large book connoisseur as the old Barend Boekman”. Pfann was the last of his time, the last old book trader in The Gate. “When this last great figure is gone”, Dubiez wrote, “when this last significant bookseller has disappeared from The Gate, a sympathetic and romantic past has come to an end”. That moment finally came in 1981.

What is left are my memories and black and white postcards from the fifties, sixties and seventies next to some artist impressions by Anton Pieck (1895-1987), one being a ‘Dickens’ fantasy, the other more realistic.

Nowadays The Gate is a somewhat dim and windy passageway. If your lucky there are two or three book niches open (one of them specialized in cookery books). But most of the time it’s just an empty passage for University Law student and some peace seeking tourists like you.

For me it’s a very special place. Here, more than forty years ago, I was infected with Bibliophilia, a ‘Gentle Madness’. It’s also a place full of memories and important in a cultural- and (book) historical sense.
Be silent for a little moment take a deep breath and relax, this is Holy Ground. 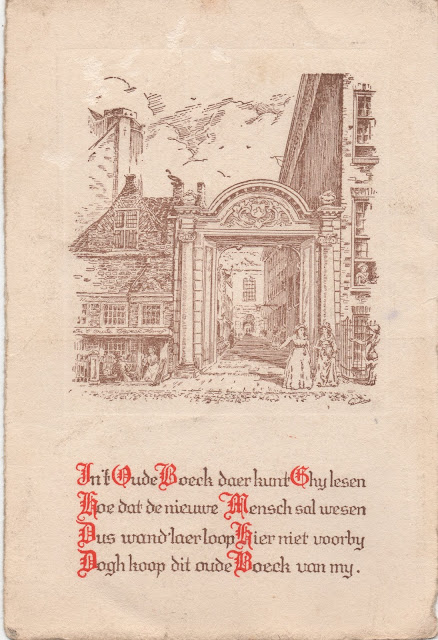