Do you have a Twitter account? I do (@Perkamentusblog), and recently I was invited by Helwi Blom (@HelwiB) to participate in the #Book CoverChallenge. I did Tweet a book cover every day (for 7 days) of a book that means something to me. You want to know why I did choose a particular book? Here they are again with a short comment and this time it's not about rarity or value, it's about emotions and memories.

Day I (30 January), I invited @fzwaan to participate in the challenge. 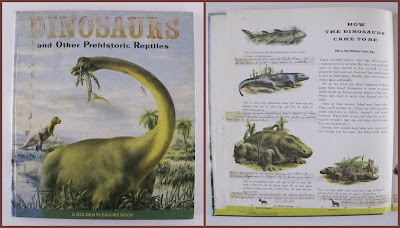 I was just eight years old and received this book from my grandparents as a Christmas gift in 1969. I was crazy about dinosaurs and fossils and wanted to be an archaeologist! Of course I couldn't read English at that time so my grandfather wrote on every page in Dutch a short translation of the text below the beautiful illustrations by Rudolph F. Zallinger. I remember that I gave my first lecture with this book at primary school. My teacher was so impressed that I had to do it all over again in another higher class. Just a common book without any real economical value but very, very dear to me.

Day II (31 January). I invited @PaulHAMabels to participate in the challenge. 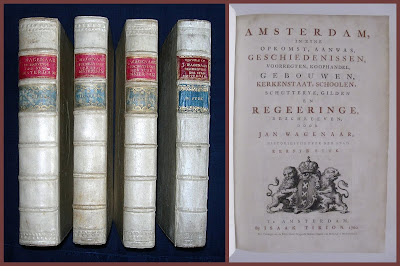 My first old prints I bought at the Oudemanhuispoort (read this English blog!). These first acquisitions were separated book illustrations from publications by Jan Wagenaar (1709-1773), an eighteenth century Dutch historian. His history of Amsterdam (three parts, the fourth published by other historians many years after his death) is still very useful and famous. Since 2009 I am the proud owner of this splendid copy, bound in contemporary vellum. In the meantime I have become an avid collector of books by my 'book shelf hero' Jan Wagenaar. Read my blog post (in Dutch) about his rare obituary ("Een uitzonderlijk doodsbericht") and about a precious dedication copy I recently bought ("Idolatrie").
By the way... the first old book I bought from my pocket money was around 1976 and was a copy of number 13 (January 2019 acquisitions).

Day III (1 February). I invited @KimHeijdenrijk to participate in the challenge. 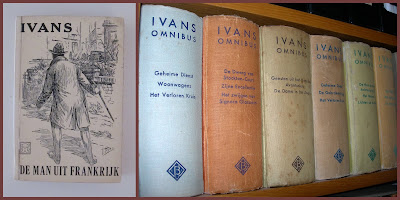 My grandfather, an intellectual and avid reader, collected detective stories. He especially liked Simenon's 'Maigret'. On one of my occasional visits, more than fourty years ago, he showed me some new detective pockets he bought by Ivans (1866-1935), one of the first Dutch detective writers.
The "The man from France" (translated in English in 1921) was the first in a series of fifteen reissues published by Bruna between 1973 an 1980. Main characters are the English detective Geoffrey Gill and his Dutch sidekick mr. Willy Hendriks ('à la Holmes and Watson'!). Their adventures and the mysteries they encounter (and solve) all take place in Europe around the first World War. After I read "The man from France" I was hooked. When my grandfather died most of his books were given to a retirement home, but I kept all Ivans pockets as a sweet memory and I still reread them. Of course, being a bibliophile, I also have the original editions in my private library.

Day IV (2 February). I invited @Reindst to participate in the challenge. 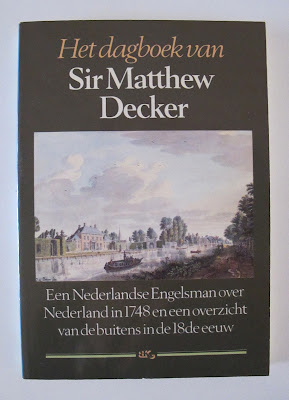 A long time ago I studied History and Dutch language at the V.L.V.U. in Amsterdam (to become a teacher at high school). This is my 'BEd', bachelor thesis (my 'promotor' was dr. A Doedens who had a publishing contract with Bosch en Keuning, together with the history teacher L. Mulder).
I discovered and translated "The Diary of Sir Matthew Decker" in Dutch and did most of the historical research (Decker was of Dutch descent, born in Amsterdam). At that time, in 1987, my thesis was the first V.L.V.U-bachelor study commercially published, and I'm still very proud of it. It is also the starting point for my love of research in historical archives (and collecting ephemera like this and these).

Day V (3 February). I invited @Loswerkman to participate in the challenge. 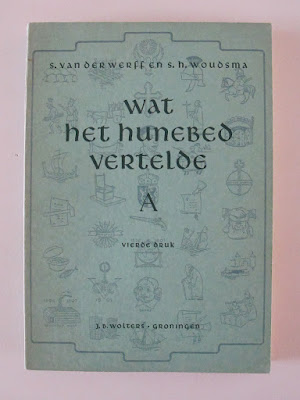 I read this book at primary school around the age of nine. It made a profound impression on me and for thirty years (in a time without internet) I searched to find a copy. Finally, I found them (part A and B) in an abandoned school building.
The story starts with the friendship between a Roman and a Teuton boy. A noble man in the middle ages finds the account of their friendship written on parchment many centuries later. As a memento he makes five friendship rings and gives them to his children. "Wat het hunebed vertelde" ('What the megalith told') is the story of these five rings and their owners through history and time (and in the end the rings come together in one family again). I think this story is what made me an antiquarian. I can 'feel' the time that passed since an object was made and can connect with the story behind it. Just fascinating!

Day VI (4 February). I invited @ShahnilaShafiq to participate in the challenge. 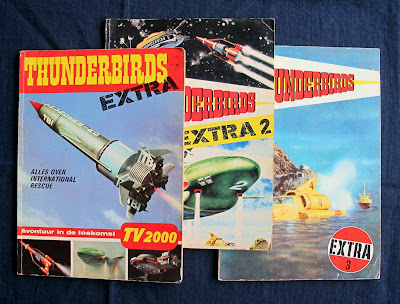 Besides collecting (and reading) books I very much love watching science fiction movies!
I think my love for this movie genre started when I was around ten years old with TV Series like 'Batman', 'Thunderbirds' and 'Captain Scarlet and the Mysterons'. I still remember that I had a lot of books, postcards and Dinky Toys relating to these popular TV Series. In the course of time my interest shifted and my Sci-Fi collection disappeared. I started to buy and to collect again some old Thunderbirds memories (comic books and postcards) around 1985. It is not a focus point of my bibliophilia anymore but I'm glad to have them back again as I wrote in "Herinneringen kopen" ('Buying memories').

Day VII (5 February). I invited one of my Twitter followers to volunteer and @MattijsGlas took up the challenge. 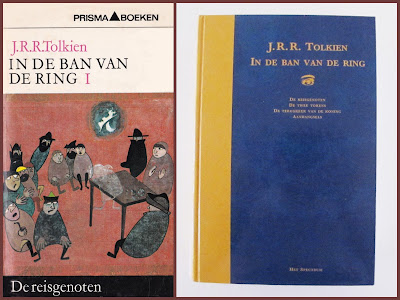 I remember that my father borrowed me his 'Prisma' copies (three parts) of this famous fantasy book when I was around 20 years old. I rarely buy or read fiction, but "The Lord of the Rings" is one of the classics that I like to reread every once in a while. Twenty years ago I bought my own copy (on the right). Of course I saw the movies made many years later by Peter Jackson (and I quite liked them). The world's first translation of "The Lord of the Rings" appeared in the Dutch language in 1956/57.
As a bibliophile I still fancy a first edition with dust jacket in Dutch, but they are quite expensive. Patience my precious dear, patience...